TORONTO, Ontario, April 24, 2019 – Enthusiast Gaming Holdings Inc. (TSXV: EGLX) (OTCQB: EGHIF), (“Enthusiast” or the “Company”) is excited to announce the recent premier of its video game documentary titled, “Shirley Curry: The Gaming Grandma“. The documentary has already received over 300,000 views and 2.5 million minutes of watch time since its mid-April launch. Nick Calandra served as Director and Omar Ahmed as Producer for the documentary which was released under the ‘Gameumentary’ label owned by Enthusiast.

The documentary explores the popularity rise of Shirley Curry, the 83-year-old grandmother, celebrity gamer, and streaming sensation who has earned the nickname “Skyrim Grandma” for her videos about The Elder Scrolls V: Skyrim. The Gaming Grandma started playing video games in 2014, and has built a loyal fanbase of over 558,000 subscribers on YouTube. 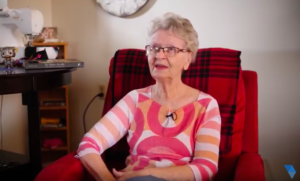 “The Gaming Grandma” reflects the new reality of the gaming community as the demographics within the industry have broadened significantly in recent years. Gaming is becoming a hobby for everyone and age is becoming less relevant. A recent study highlighted that 20% of all gamers in the US are now between the ages of 36 to 49 and 23% of all gamers in the US are over 50 years old(1). Enthusiast’s platform and significant network provides communities for gaming enthusiasts of all ages and located all over the world.

Nick Calandra, Founder and Director of Content for Gameumentary commented, “Since being acquired by Enthusiast in June 2018, Gameumentary has seen significant growth. We have launched 18 gaming documentaries worldwide since 2017, and most recently, the Gaming Grandma which already has over 300,000 views. Our documentaries and short films are meant to tell the stories behind the games and its fans, and the support and partnership with Enthusiast enables us to continue producing content.”

Enthusiast acquired Gameumentary in June 2018, as a property focused on telling the stories behind video games and the communities that play them, through long-form and short documentaries. Gameumentary has already produced 18 documentaries and with the support and management of Enthusiast, has traveled around the world from Los Angeles to Seattle, Austin to Prague, Ghent to Amsterdam to find exciting content.

Since the acquisition, the company has seen substantial growth with an increase of 440% in views compared to the same period, Q1 2018. Gameumentary will continue its momentum with three more studio documentaries planned for 2019. The next major documentary will cover the Insurgency series by New World Interactive, expected to premiere this summer.

Founded in 2014, Enthusiast Gaming is the largest vertically integrated video game company and has the fastest-growing online community of video gamers. Through the Company’s unique acquisition strategy, it has a platform of over 80 owned and affiliated websites and currently reaches over 75 million monthly visitors with its unique and curated content and over 50 million YouTube visitors. Enthusiast also owns and operates Canada’s largest gaming expo, Enthusiast Gaming Live Expo, EGLX, (eglx.ca) with over 55,000 people attending in 2018. For more information on the Company, visit www.enthusiastgaming.com.